A Hangover Smoothie for our Cooperative Festival

Fantastic bands, weird and wonderful kids crafts, sports and activities, pop up drinks stands, a cracking hangover smoothie and lots of glitter. These were some of the things on offer this weekend gone at a little festival we organised in Sussex called DIYestival. We ran this as a cooperative affair with a group of friends, meaning everyone brought something to the festival, whether it was music, yoga, kids football, crafts or food and drink. Many said this was their all time favourite festival, so we’re already being asked for next year’s date!

This is “The Bar”. It was hand built for the event by our tree surgeon friend, Stephen Duance, who runs South Coast Tree Care. This gave a fantastic central place for laughs, hugs and of course the fantastic drink pop ups.

Ticket prices for the 160 festival goers were kept low, just to cover costs. Any profits are donated to the Lymphoma Association.

DIYestival took place on a beautiful farm near Ashurst in Sussex. Kids had lots to do and explore independently in a safe environment. Meaning adults had fun and relaxed, knowing their kids were never far away. 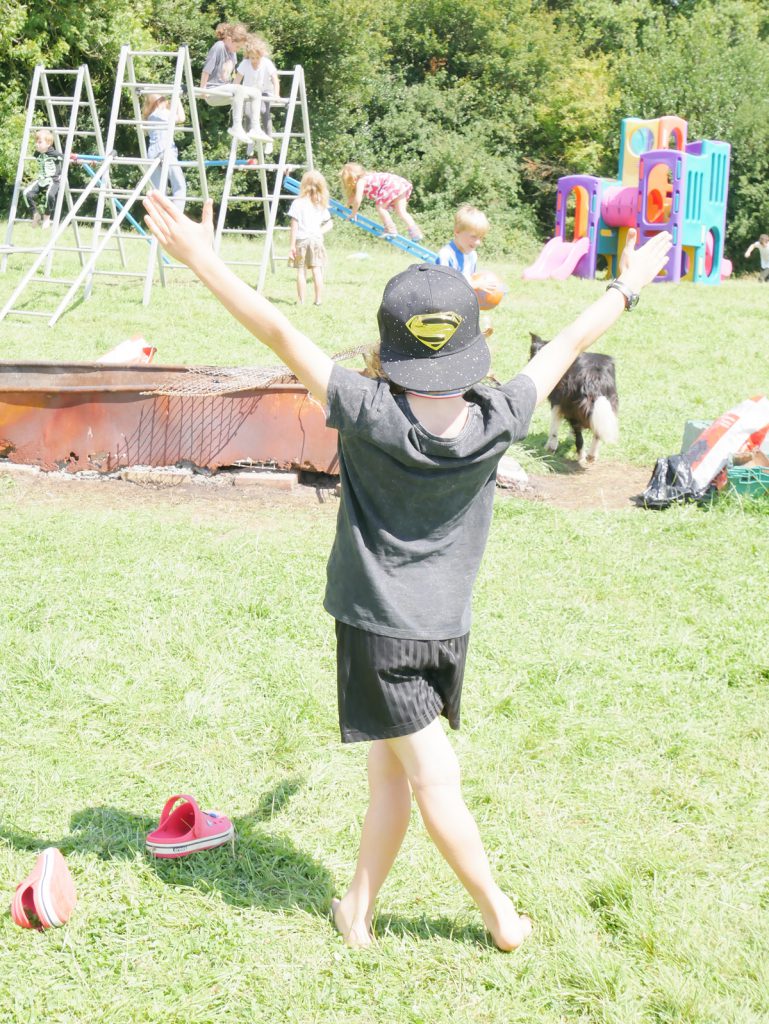 The kids loved their freedom in the festival arena. There were climbing frames, a bouncy castle, a craft tent and lots of activities to keep them busy. Being a cooperative festival, festival goers took turns running activities like football games, dream catcher making, a talent show and more.

The glitter bar and face paint pop up tent was a huge success among kids and adults.

The Dadness was formed for DIYestival. They had such fun that the band will stay together! Malcolm Ward, Andy Costello and Rupert Webb, plus guest singers.

To combat potential over indulgence, I ran a smoothie stand with refreshing smoothies day and night, with an optional shot of rum. A big thanks to Juicy Retreats for providing their brilliant JR Quantum Touch blender for the event.

I had such a good time running the smoothie pop up at DIYestival! Many thanks to Juicy Retreats for supplying their fabulous JR Touch 3 Quantum blender. This made quick and silky smoothies an absolute breeze! I also made some snacking hummus in between jugs of smoothies.

For any of the recipes above, just pop them into the blender with ice and run until smooth.

Green Dream, a.k.a. the hangover smoothie

This Green Dream is a fantastically nutritious AND delicious hangover smoothie. It’s actually great for any time you’re not feeling your best. I wasn’t sure how a green smoothie would go down with the festival crowd, but it was one of the most popular recipes.

This great recipe is from Daily Burn.

Refreshing honeydew melon, fresh basil and apple juice smoothie. Perfect when the sun finally came out on Sunday morning! The evening before, it was nicely spiced up with a shot of rum. 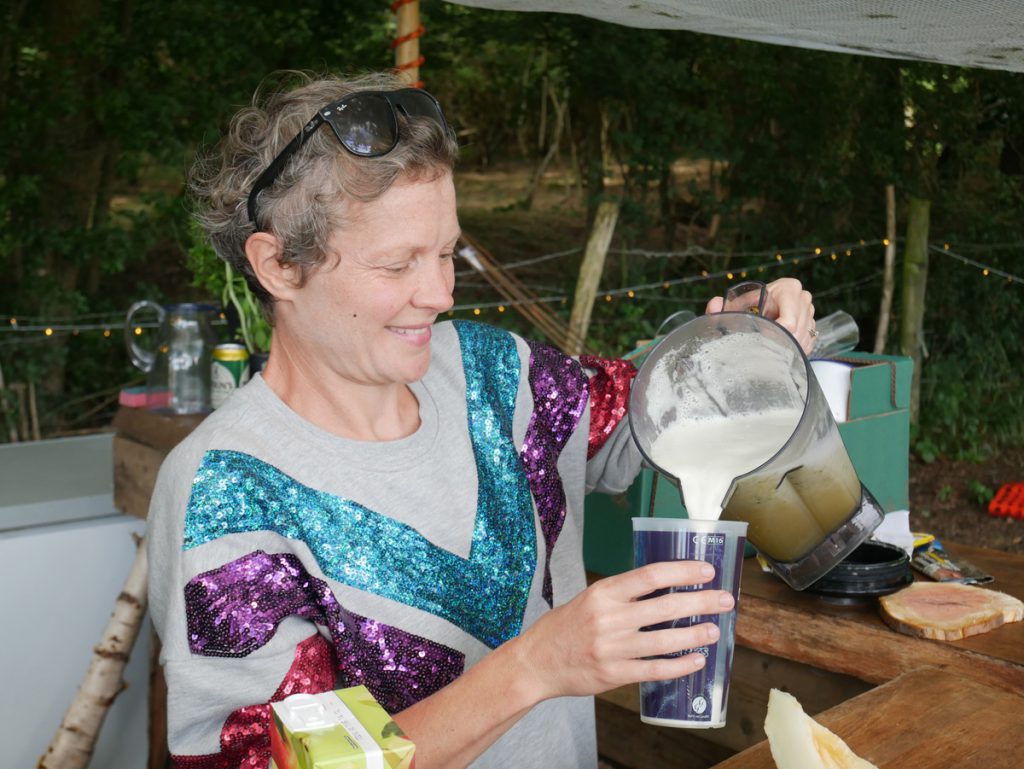 Make sure you use honeydew melon (not gala), as it needs the sweetness. Add either basil or mint for a subtle and interesting flavour and serve over ice.

Two smoothies going down fast! The kids loved the strawberry, banana and coconut milk smoothie. The adults, after a night of partying, really appreciated the revitalising green hangover smoothie!

Many reported this hangover smoothie sorted them out big time! Try this Green Dream smoothie for yourself if you’re tired, ill or otherwise a bit rough around the edges: Banana, spinach, ginger, grapes, lime juice, coconut milk.

The kids enjoying the banana, strawberry and coconut smoothie. Yoga session in progress in the background.

This is how even the adults felt after a revitalising smoothie! Air guitar comp in full swing!

A Pop Up Cooperative Festival for All to Get Involved

The kids talent show got the kids involved in the festival’s communal feel. We were treated to singing, dancing, drumming and much more. This is the organiser and judge panelist!

The theme of the DIYestival was glitter, and the rotating glittery staff at the bar certainly served up some treats! Craft beer, sangria, mojitos, Pimms and more. Happily sitting alongside my smoothies 🙂 The strict no glass rule worked brilliantly, with everyone bringing their tankards and other drink vessels.

Big thanks to the Cubs in Shoreham by Sea for lending us the festival tent. It looked so fun and welcoming with cheery decorations, and gave us shelter from the two day downpour. No moods were dampened by the weather though! The tent team had a great time putting it up and dismantling!

We had two central spots for the festival; the main tent and this stunning, hand built bar. 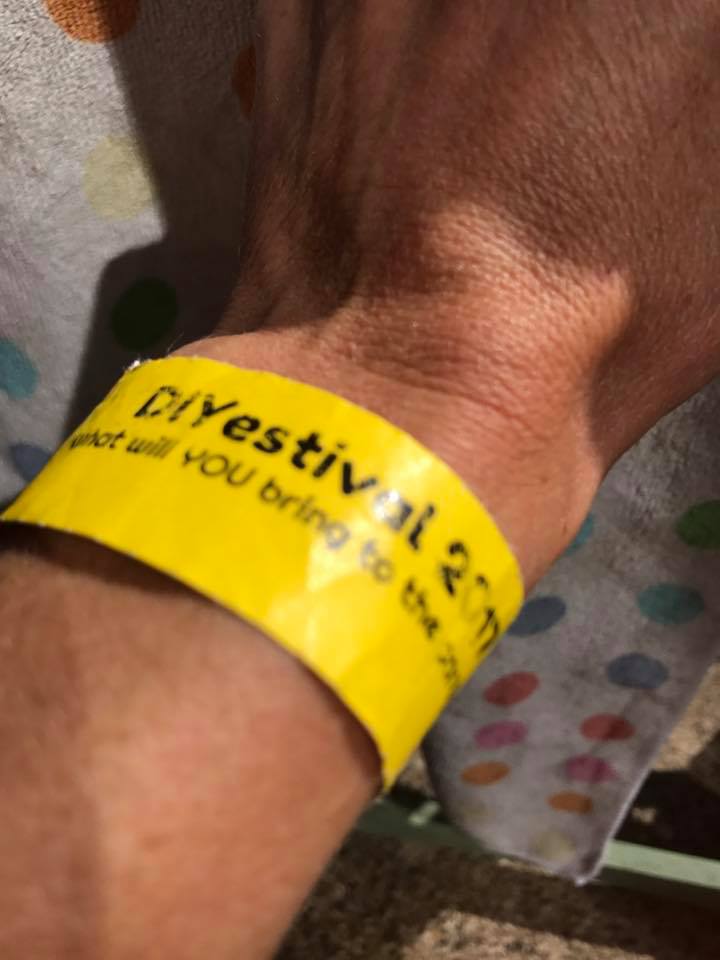 What will you bring to the festival? Photo by artist Charlie Lee. Check out her inspiring Instagram.

If you like the sound of a hangover smoothie and more, why not also try my bedtime smoothie recipe or this heart and brain powering green juice.

A piece of glassblowing history in Sweden not quite lost

The Future of Design: Climate and Wellbeing as an Opportunity