The House & Garden fair, known as the House & Garden Festival, has just taken place at London Olympia. There were three sections to the festival; HOUSE, Spirit of Summer and the garden dedicated GROW sector.

Many of the unusual succulents and air plants on show were particularly striking. I also found some stunning plant vessels, such as those from Monti by Monti (so much so that I couldn’t resist including several of her pieces in the image gallery in this post!).

I’m also just a *liiiiiittle* bit obsessed with Sophie Lee’s book Living With Plants: A Guide to Indoor Gardening, available on Amazon in hardback or Kindle (just follow the link). Sophie Lee is also the person behind Geo Fleur; sellers of weird and wonderful plants.

Right, following that mild distraction from inspiring house plant books, I’ll get back on track. So here’s a roundup of my favourite things on show at House & Garden Festival, the self-proclaimed “London’s only contemporary garden fair”.

Roundup of the House & Garden Fair

Projekti Tyyny patchwork quilt, throws and cushions in 100% cotton. Designed by Finnish Nora Nilsson in Dorset, hand made in India.

Customise your plants with Urban Live Picture. These living art frames have an internal watering system that can water the plants for up to 6 weeks. Urban Roof Gardens work their magic on roof terraces.

Living with Plants: A Guide to Indoor Gardening. By Sophie Lee of Geo-Fleur, sellers of weird and wonderful plants.

A collection of unusual plants and one off vessels by Blue Leaf Plants. 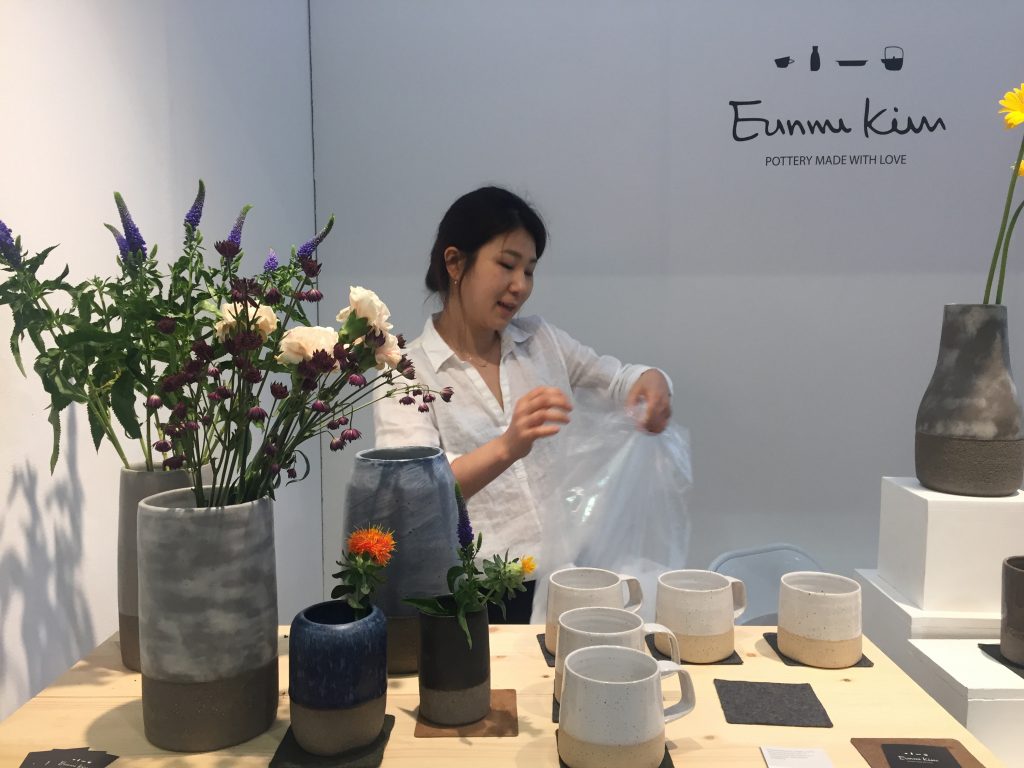 Table by Benchmark; a great statement piece in an office or large kitchen/dining room. With a silky tactile wooden quality, it’s a beautiful way to connect people to nature.

2LG (2 Lovely Gays) interior design stand in collaboration with Benchmark for the Festival.

Biophilic design in action. Incorporate plants into your table, with this chamber inside Benchmark’s table. Seen at the 2LG stand at House & Garden Festival.

Wall hung air plant by Monti. As well as hand made hangers and planters, they also sell a fantastic selection of air plants and succulents.

And something nutritious to keep you going…

This raspberry chocolate by Oh So really is so good! And made so much better with only natural sweeteners and live cultures to support your gut health.

SugaVida has a low GI, is anti-oxidant and and contains vitamin B12. These help improve your energy, mood and sleep.

Sadly I didn’t take a photo of it, but I also had the most beautiful drink by SugaVida at the show. It’s called Turmeric Latte, and contains the only healthy sugar alternative SugaVida. The drink has a low GI, is anti-inflammatory and contains vitamin B12, so reduces stress and helps promote steep. It also actively reduces any sugar cravings. You can buy the Turmeric Latte on Amazon with these links in [amazon_textlink asin=’B072BKF39Q’ text=’original’ template=’ProductLink’ store=’chalkandmoss-21′ marketplace=’UK’ link_id=’3f137b35-5fff-11e7-ab14-4394de58b641′][amazon_textlink asin=’B0716LYL4F’ text=’ginger’ template=’ProductLink’ store=’chalkandmoss-21′ marketplace=’UK’ link_id=’24610838-5ffe-11e7-924c-e55652bfc8ba’] and [amazon_textlink asin=’B071RVVKM9′ text=’cardamom flavour’ template=’ProductLink’ store=’chalkandmoss-21′ marketplace=’UK’ link_id=’62ab61d9-5ffe-11e7-a16e-e34334dfff83′] (this is my favourite). They mixed the powder with almond milk, which was absolutely delicious, but you can add any milk of your choice. I’m really interested in the sleep promoting properties of SugaVida, so have bought the [amazon_textlink asin=’B00T5PLWMG’ text=’SugaVida sugar’ template=’ProductLink’ store=’chalkandmoss-21′ marketplace=’UK’ link_id=’c69784d7-5ffe-11e7-b1e5-73d70b8b860a’] itself to give to my daughter as part of my quest to help her fall asleep easier. I was instructed to give her one teaspoon evening and night and watch her drop off after ten minutes! Do get in touch if you’d like to see the results. You may also be interested in the sleep smoothie recipe I posted recently, which includes the reasons behind the ingredients.

If you want more…

Last week, I looked at some of the things that would take place at the show, and some of the exhibitors. You can read my fair preview here.

Photos by me, Anna Sjöström Walton.