The textile patterns, furniture and relatively unknown paintings by Josef Frank of Svenskt Tenn have been exhibited at London’s Fashion and Textile museum this spring. 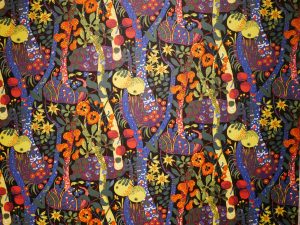 Josef Frank’s Tre Öar i Svarta Havet (Three Islands in the Black Sea)(1935). Purple islands float in a sea filled with vegetation. This was his first fabric to be printed using the new screenprinting process.

Josef Frank was forever the optimist and nature lover. In a world adapting to WW2 and industrialisation, he designed textile patterns depicting a paradise with fantasy botanics in every colour.

Austrian born architect and designer Josef Frank moved to Sweden in 1933, due to rising anti-semitism and the rise of Nazism. He was invited to join Swedish interior design firm Svenskt Tenn. Like Svenskt Tenn’s founder, Esther Ericson, he was a functionalist. Yet he challenged functionalism’s ideals, in that he insisted that a home should above all feel cosy, comfortable and adapt to the inhabitant.

In Josef Frank’s Italian Dinner (1943-45), all the food needed for a meal grows from one branch, with more delights growing on the river bed.

What strikes me is the freeform nature of his work. From a single stalk can come any multitude of fictional flowers in different forms and colours. Homes and textiles designed by Josef Frank are filled with joyous patterns in Garden of Eden like abundance.

Influenced by William Morris, his prints and paintings cover the entire surface of the canvas. Frank’s designs are now Modernist classics; Frank was in a recent poll named as Sweden’s most influential designer.

Svenskt Tenn, founded in 1924, continues producing the works of Josef Frank, among other top Swedish designers. The company’s core principle was and remains “Made in Sweden”. Their shop can be found on the exclusive Strandvägen in Stockholm, where the majority of products are their own designs. Profits fund research into environmental sustainability, biomedicine and geoscience. 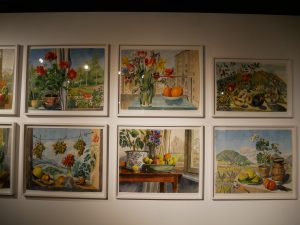 Frank’s paintings often depicted landscapes and fictional buildings he designed for friends, but were never intended to be built.

Less known, is that Frank spent 15 of his later years creating over 400 watercolour paintings. The paintings are quite different to his patterns for interiors, often a more realistic portrayal. Many paintings show a view from a kitchen window. This view is however not dissimilar to my feeling about his textile patterns; that I’m somehow privy to a secret world of fantasy flora and fauna. It’s a matter of perspectives.

I was lucky enough to catch this exhibition just as it was ending 7th May, so I’m so sorry I can’t send you there to experience it in full! Do send me any questions about it, or if you’d like to see more of my photos from the exhibition.

You can now follow me on Bloglovin' too for easy updates on new posts!